It’s an artist’s, engineer’s, designer’s, architect’s, student’s, and general human’s best friend. it isn’t just a cute stationery tool, it’s a real tool too. It packs a pen-stand, rounder/compass, wrench, scale, bottle opener, and drawing guide all in one.

There are two very clear ways of looking at the Magcon. It serves the purpose of a drawing tool, and it also works as an EDC tool. The Magcon comprises two utility modules, a straight ruler with linear perforations, and a second abstract ruler with a curved profile, drawing guides, a set of wrenches, and a bottle opener. These modules can be used independently as you would a scale or a french curve ruler, but things get more interesting when you introduce Magcon’s Compass base to the mix. it is a highly portable multi-functional cute stationery item with many more handy capabilities than a traditional compass. It doesn't poke holes through paper as it has no sharp point, and yet is still stable enough to not move around thanks to the specially designed rolling base. The Compass is a solid piece of machined stainless steel that works not just as a compass-guide, but also as a pen-stand. It has a hole at its base that you can use to place the Compass wherever you need, and magnetically allows the ruler units to snap to it. Once magnetically attached, the ruler units swing freely in 360° around the base, allowing you to create circles and measure arcs nearly perfectly, while achieving this feat without piercing the paper. Markings on the Compass base even let you measure degrees as you draw circular lines, giving you control and intuition, bundled together in tools that don’t change the way you make circles or lines, but just innovatively improve the process and cut the clutter, thanks to its minimal design.

The first attachable wing is a reinvention of the traditional compass. It gives you the power to draw perfect circles, from radius 16mm to 80mm (holes are spaced at 4mm increments). It also doubles as a ruler, which enables you to draw straight lines, angles and beautiful arcs. 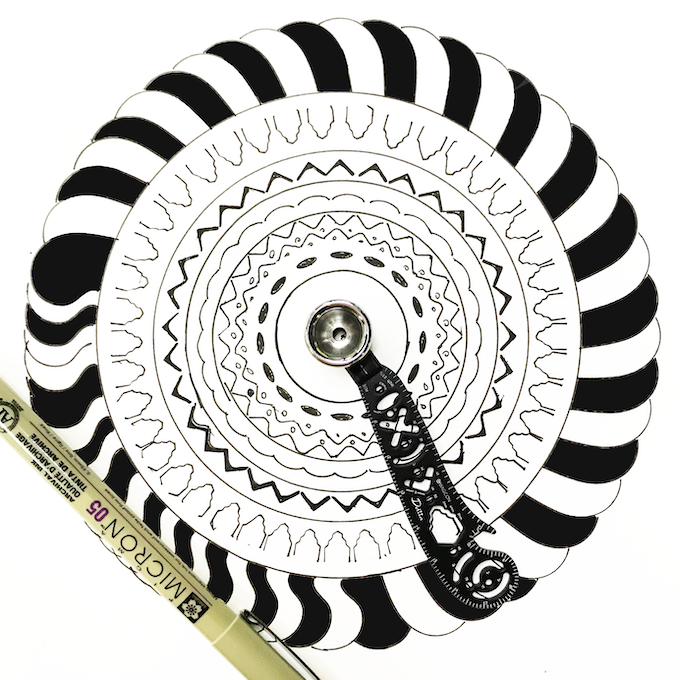 There’s a lot this cute stationery EDC tool can do. It can let you make perfect lines, arcs, circles, measure drawings, make mandala patterns, and even let you rest your pen/pencil in it when you’re taking a break. In fact, it’ll do you another solid and let you open a nice bottle of soda while you’re on that break!

Here comes an interesting twist — did you know that it works wonderfully as a beer opener?  To open beer bottles, we recommend using the aerospace aluminium or stainless steel wings since they are much sturdier than the aluminium ones. It is also a protractor for high-precision arcs. It can be conveniently slotted into a notebook, making it the perfect little bookmark, which is also capable of drawing guide lines and circles. You can use the back side of the wing and book edge to assist faster drawing.

It can hold pens of different sizes as long as the diameter is no bigger than 10.8mm. When placed on the desk, it can hold a pen as well as the wings. The holes can accommodate various cartridges of pens, pencils and markers.